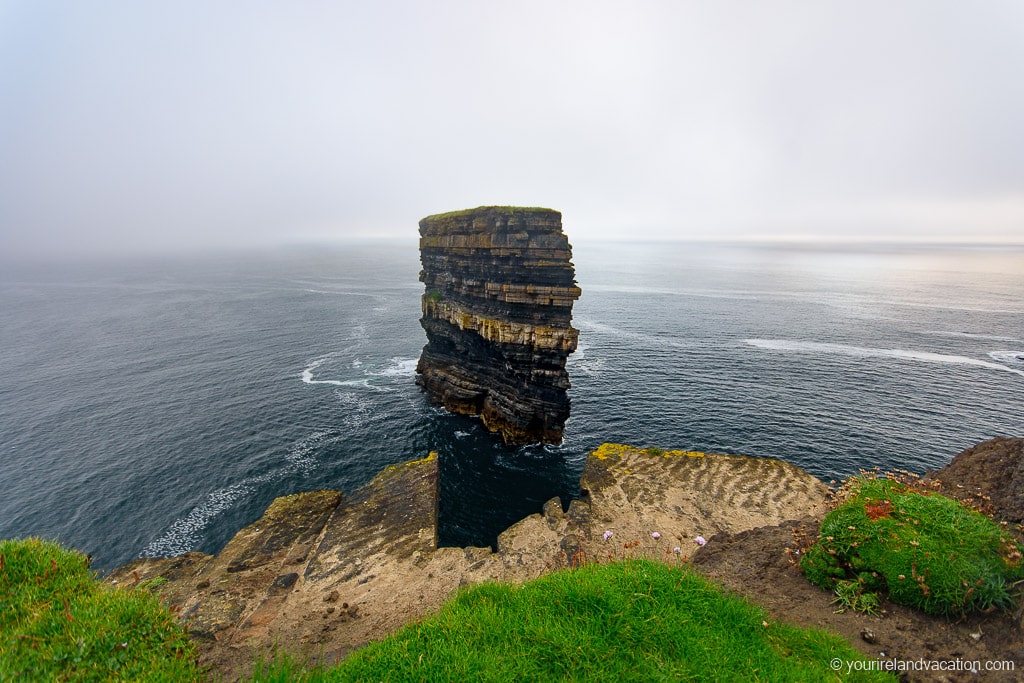 The epic view of Dun Briste from Downpatrick Head

Dún Briste literally means “broken fort” and refers to the fact that at one time the stack was connected to the mainland. It was severed from the mainland during a massive storm in 1393.

The stack currently rises around 50 metres out of the water and is topped with a grassy crown. It is home to many nesting birds 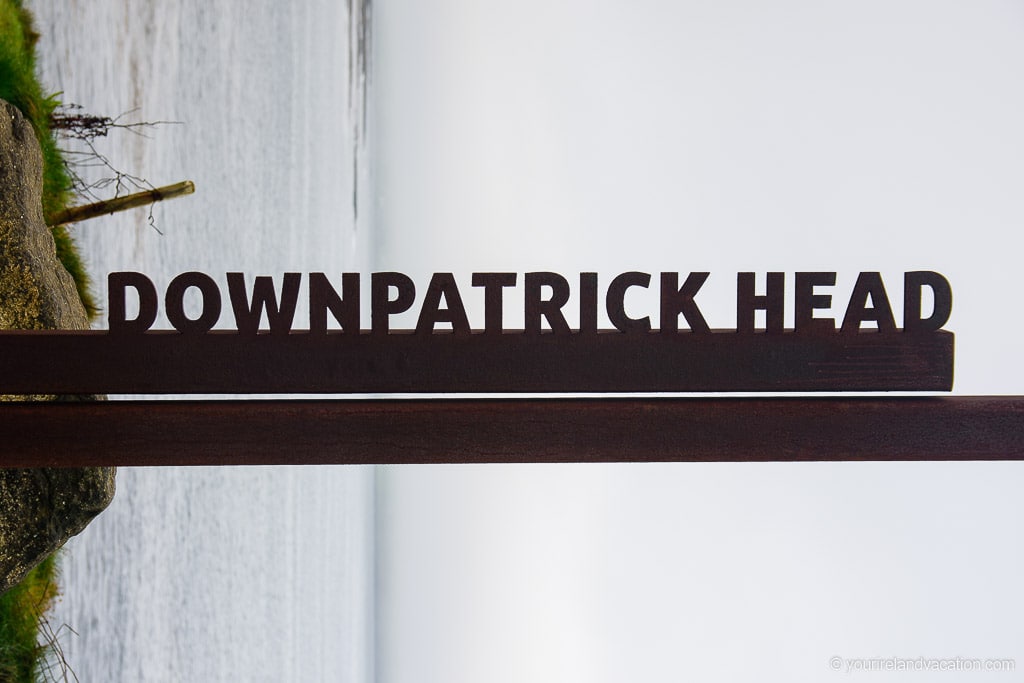 Downpatrick Head is located around 30 minutes-drive from Ballina along the scenic Mayo coastline. It is most easily reached by car. There is a visitors car park at Downpatrick Head and it’s short walk to the edge of the cliff side overlooking Dún Briste. 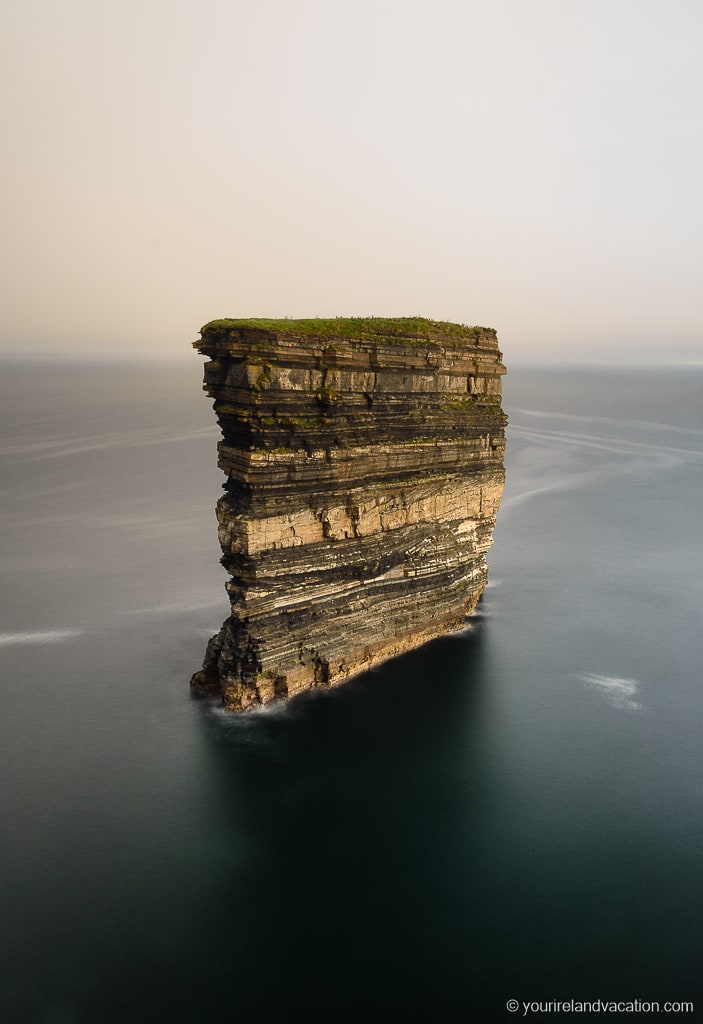 The stunning Dun Briste at sunrise 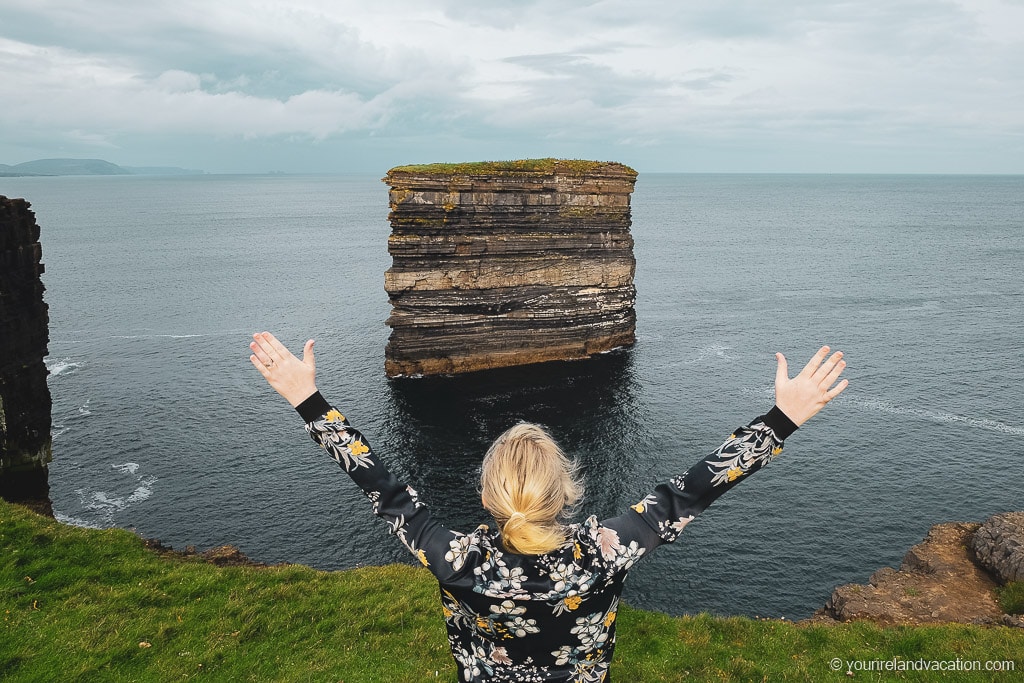 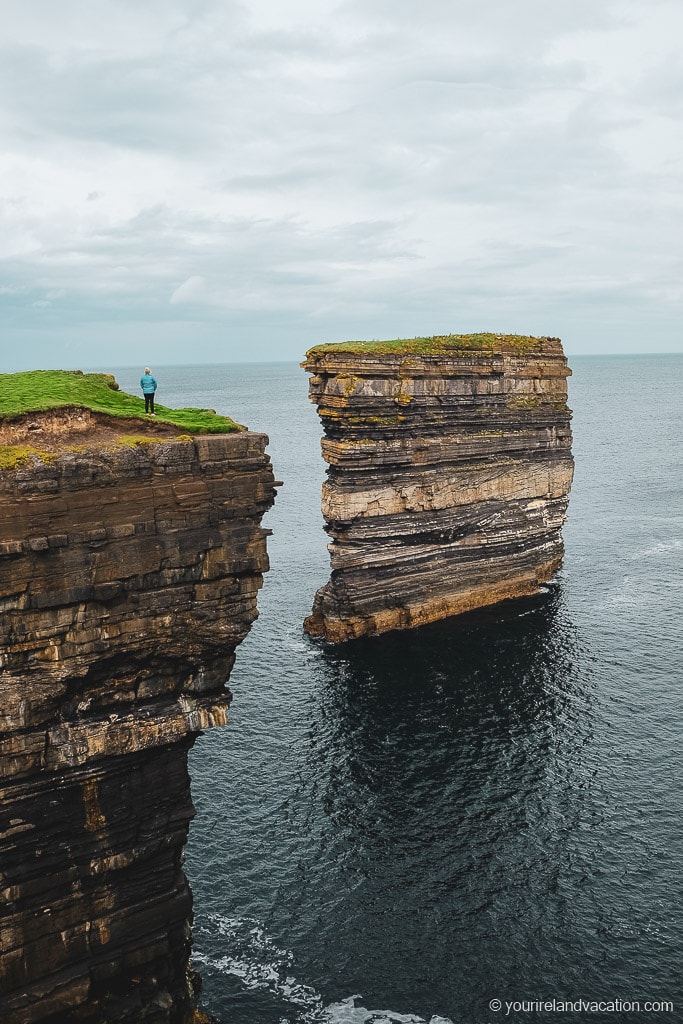 Visiting Downpatrick Head tip: A word of caution for your visit to Downpatrick Head: the coastal viewing point area where visitors can view the stack is not fenced and it’s a sheer drop to the water below, so be very careful. This applies especially on windy days as the area is quite exposed. The grassy area around the cliffs is quite unique as it has developed into a very uneven/bubbled grassy area. Due to this it’s very easy to trip and fall near the cliff edge to take your time while exploring the area!

There is a massive blowhole known as “Pul Na Sean Tinne“ or “Hole of the Old Fire” located just inland from the stack itself . There is an elevated viewing platform that allows you to peer into the massive crashing waves below. From here you can feel the true force of the Atlantic Ocean as it crashes into the darkness below. On stormy days when the waves are large, sea spray can be seen shooting up from the hole!

The view from the viewing deck of the Downpatrick Blowhole 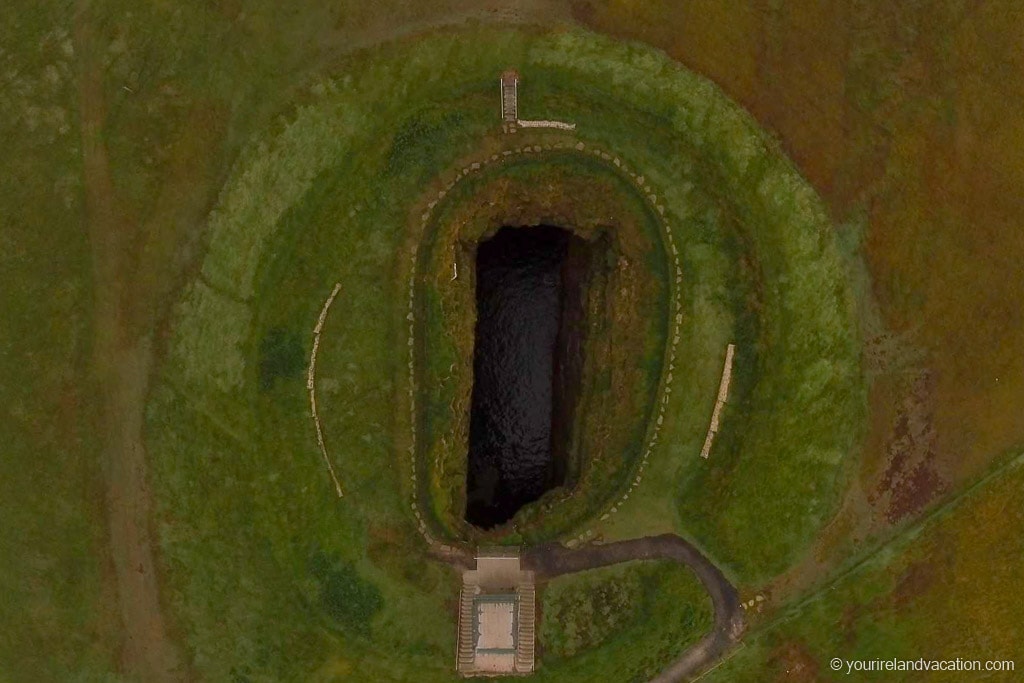 The blowhole from above

There are two main viewing areas to see Dun Briste from.

The first is the area around the small stone building close to the blowhole. From here you can get a close-up view of the sea stack as the Atlantic ocean relentlessly pounds it’s base. 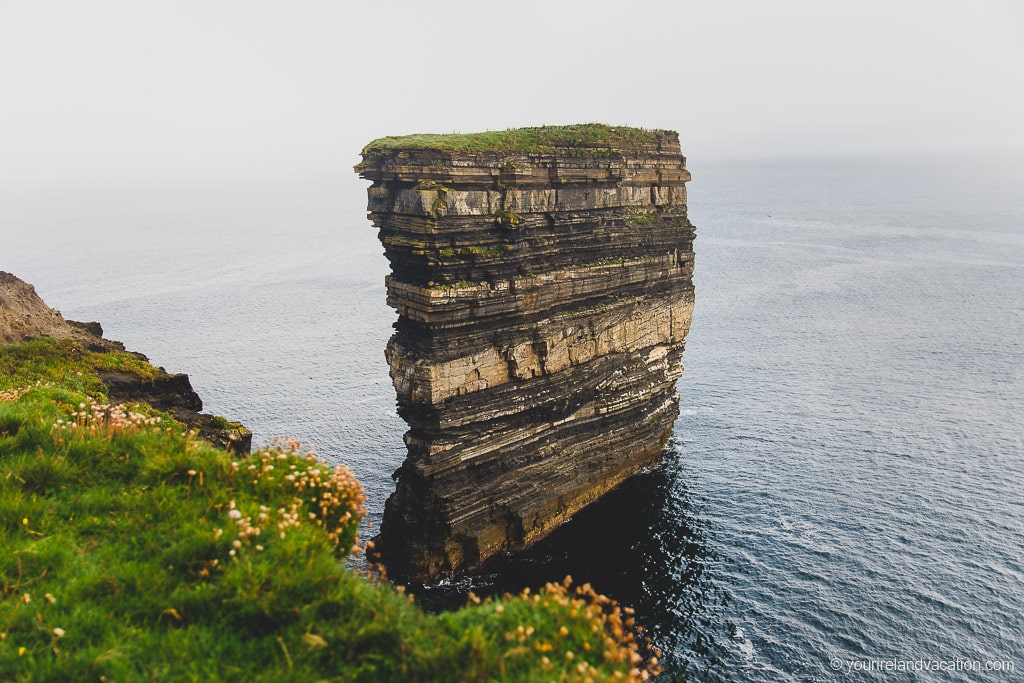 The second main viewing area is from the tip of Downpatrick Head. This is a short walk along the cliffside to the east of the small stone building.

This was our favourite view of Dún-Briste as you can see the sheer side of the sea stack against the backdrop of the cliffs and the Mayo coastline in the background. 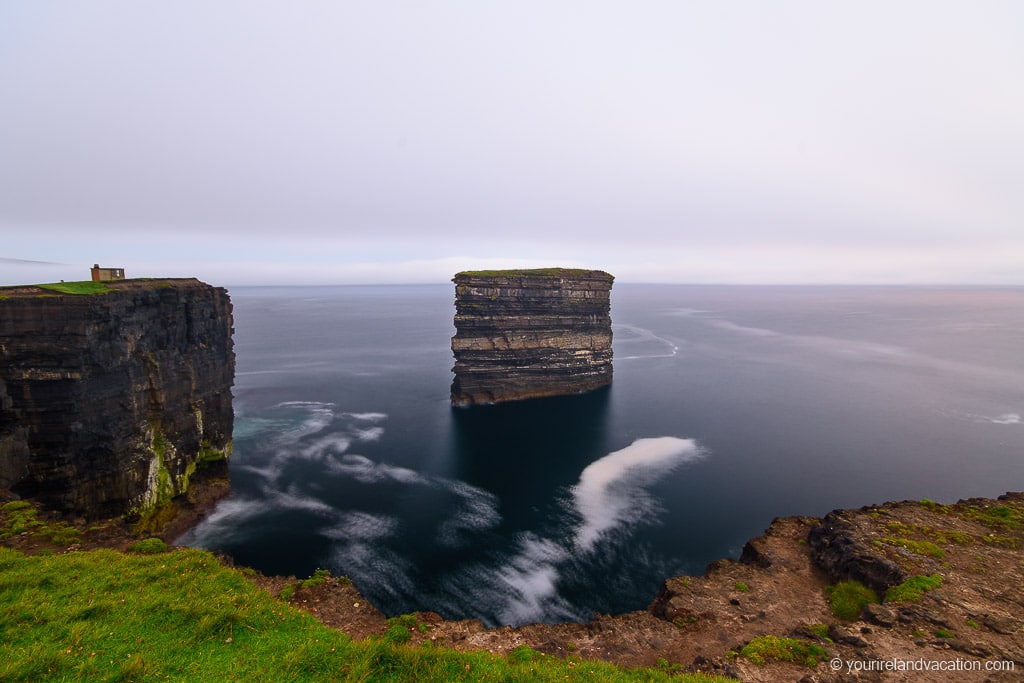 Our favourite view of Dun Briste from Downpatrick Head

One of the most unique aspects of Downpatrick head is the massive stone “Eire” sign on the grassy top of Downpatrick head. The sign is one of 83 similar lookout posts which were placed at various points around the Irish coastline during World War 2.

Their purpose was simple – to tell pilots that the country below them was Ireland and hence neutral. The small stone building located beside Dún Briste was a lookout post that was manned 24/7 during World War 2. In time these lookout posts became extremely important for relaying marine and aircraft activity to the Irish Defense Forces. 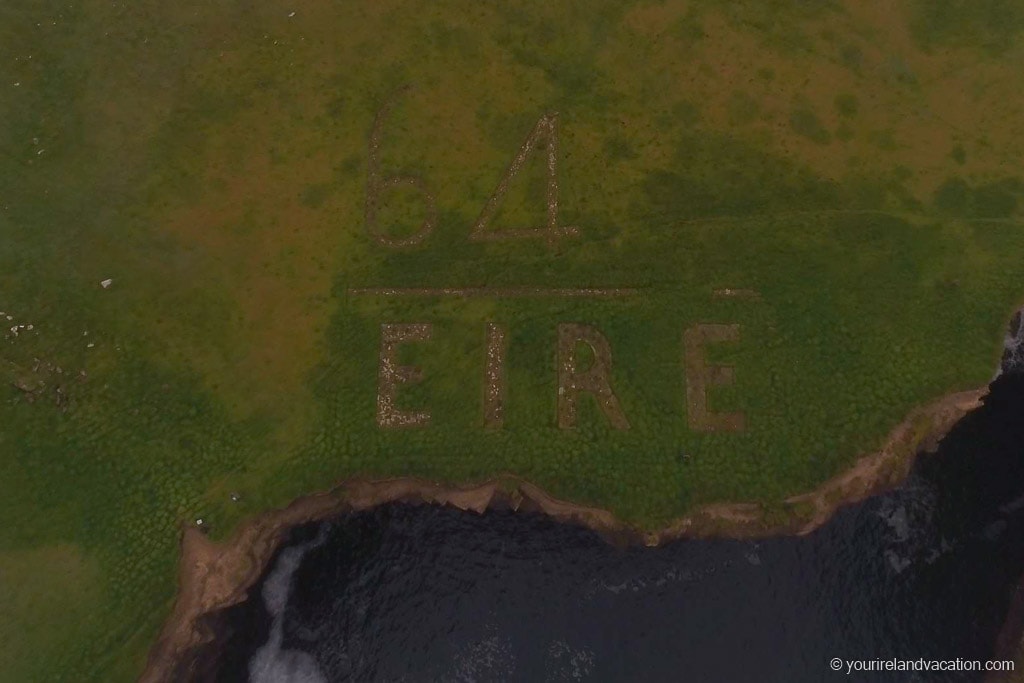 Close to the blowhole are the remains of a church founded by Ireland’s patron saint, Saint Patrick. Today a stone statue stands in the ruins of the church to commemorate him. 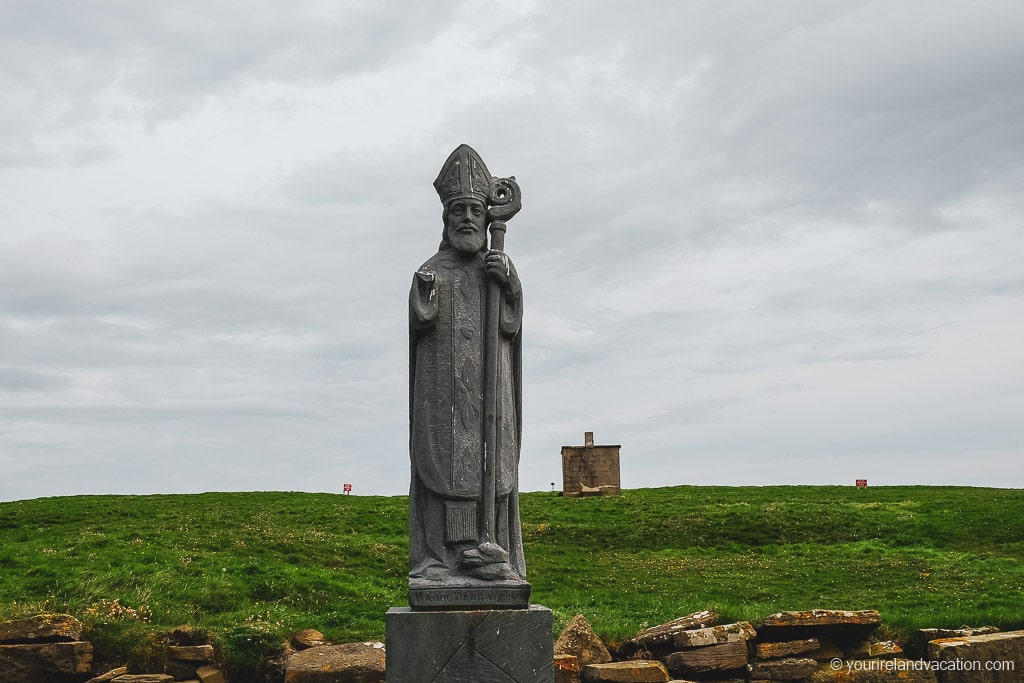 The statue of Saint Patrick at the old church ruins

Other Co Mayo sights nearby

Take the opportunity to visit these other Co Mayo sights nearby.

The north Mayo coast is some of the most rugged along the Wild Atlantic Way. If you’re planning a visit to Downpatrick Head make sure to also stop by the Céide Fields, one of the oldest fields systems in the world. This site is over 5,500 years old. Tickets cost only €4 per person and its definitely worth a stop. 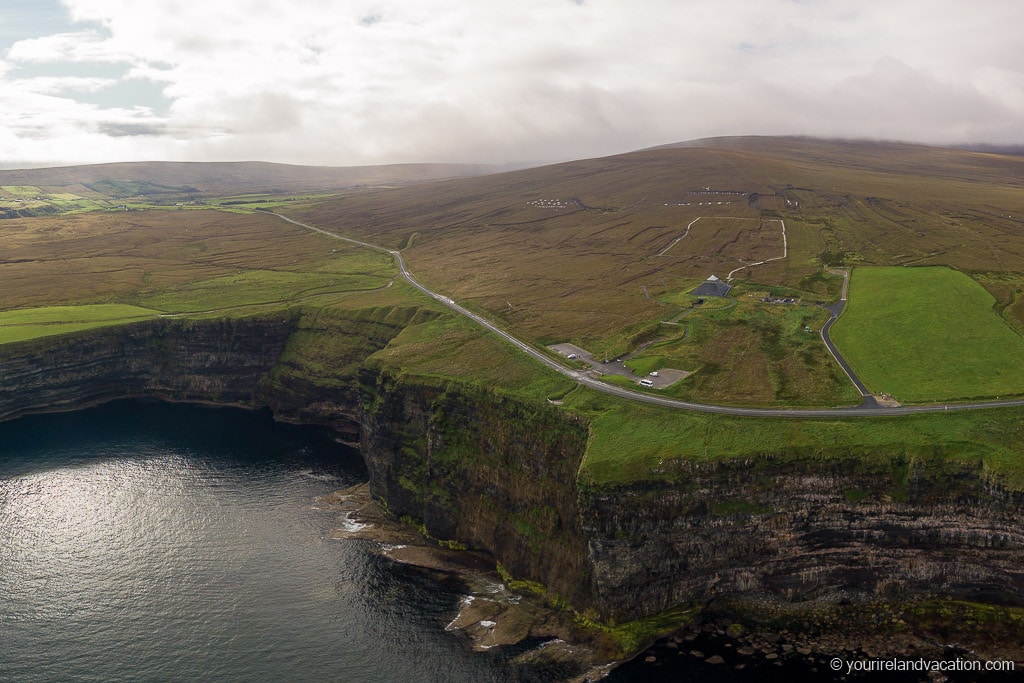 The Ceide Fields from above

This small but beautiful island is connected to mainland Ireland by a short bridge and is home to some of the most pristine beaches and stunning coastline in Ireland. No trip to County Mayo is complete without spending a few days exploring Achill Island.

From the epic coastal drive around the island to it’s gorgeous beaches Achill Island is not to be missed. One of it’s beaches, Keem Bay,  was voted one of the best beaches in the world in 2019. 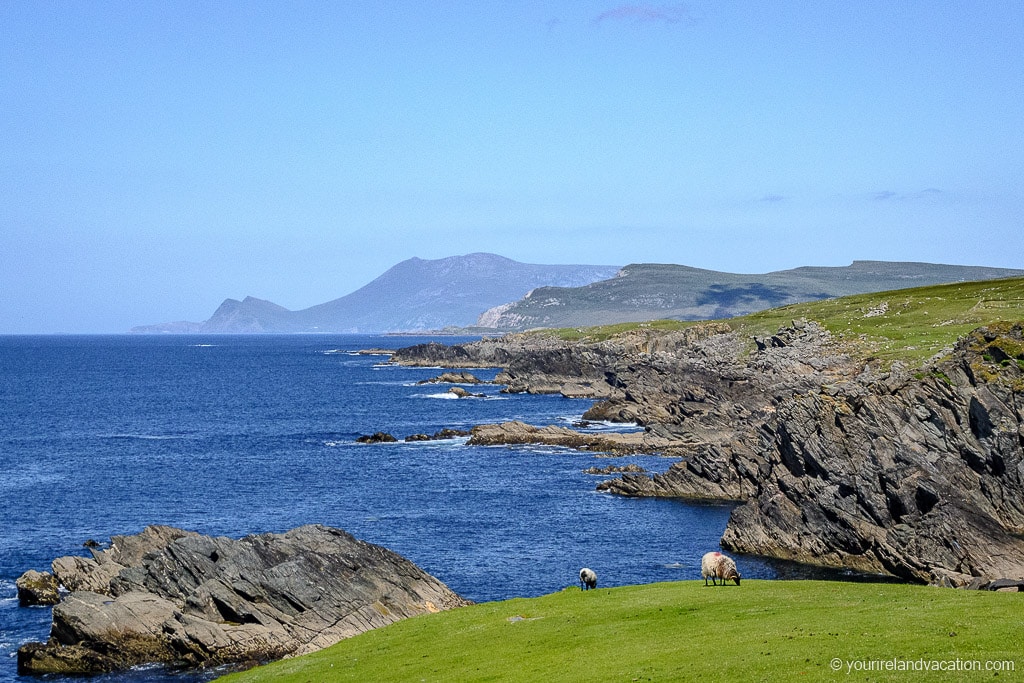 Planning a trip to Ireland?

Subscribe for free travel advice for planning your trip to Ireland

Helping you make the most of your trip to Ireland